We're super excited to say that we've reached our first stretch goal, and with that, more romantic scenes and story development are guaranteed!!! 〇(＞∀＜)〇

Every pledge from now will go towards the art upgrade. Let's treat ourselves to more CGs and sprites everyone! >w<)9

Now, the elusive Emrys doesn't speak of himself much, so we'll do it for him on today's character spotlight!

◆ Emrys will tell you that his eye for the finer things in life far surpasses that of anyone else’s, but that’s just a fanciful way of saying he collects shiny things.

Additionally, rumors constantly run rampant about how Sheorya’s palace treasury is filled with more gold and gems than every noble house in the three kingdoms combined. 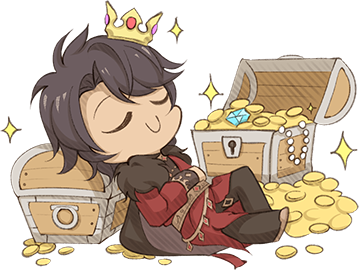 ◆ In spite of his vicious reputation, Emrys treats his people far better than most.

His soldiers bend to his whims, not out of fear, but genuine respect. He actively takes their opinions into consideration and ensures their families are taken care of first and foremost.

◆ Although he may not look the type, Emrys has a keen mind for strategy games - he’s a wicked chess player and even better at cards.

Unfortunately, his skills are equal to how annoying he is to play with - he gloats when he wins and pouts when he loses. 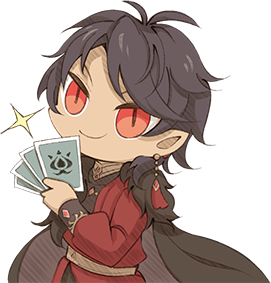 ◆ Emrys outright refuses to eat anything that hasn’t been enchanted first. Some believe it’s a safety precaution, but the general consensus of his employees concludes that he’s just picky.

◆ When presenting himself before the courts, Emrys tends to keep himself fully covered due to the impressive collection of scars covering his limbs, chest, and back.

Each one has a story, but none are anything he’d speak of before a gaggle of curious nobles.

That's it for this update! Thanks for dropping by and we hope you guys enjoyed the trivia of our maverick prince :D

When I tried the demo, I had a dilemma of choosing between him and Neri. But then, I realized, Neri isn't even an option. T_T But dang! In the last few parts of the demo, he really went for my heart. Now, I can't wait to see more of him and his interactions with MC. I'm freaking in love.

Also... he has an uncanny resemblance with Lucius, or is it just me? O_O

It's definitely not just you! I have a feeling they're actually the same person.

He seems quite cocky at first glance but soon it becomes clear what a smart and strategic man he is, which is hot af. Not to mention the way he wholeheartedly respects and supports the mc's decisions... for that alone he had my whole freaking heart!

He will treat your heart with utmost care <3 Glad you like him!

Emrys was already ticking ALL of my boxes in the demo, especially in that one blushy scene, but these fun facts have turned him into the new love of my life. *Whew* what a man, and he's so CUTE. I definitely hope we get to see those scars sometime during his route hehehe <3

A man who can be both cute and pack a punch <3 Glad you like him!

i loved the music too^^