Keep the main characters alive through the story by improving their skills. Host social events to gain different factions’ approval. You can also go on campaigns to bring the ongoing war to an end.

This game is an indirect sequel to our Visual Novel "Royal Alchemist". The story takes place in the same world, but follows a different cast. Both games can be played separately from each other.

The Sval, pirates of the utmost north, are wreaking havoc all over the continent of Igrith.

Vowing to bring an end to their endless plundering, three kingdoms send forth their royal heirs to the High Council, a powerful and influential faction of magicians, to plead for their help during this time of crisis.

The High Council oblige, creating the Royal Order, and the heirs remain; however, political tensions are high as old grudges resurface between the three kingdoms. And, as the pirates continue to have their way, they are determinedly bound to reach their breaking point.

Play as Aarya, the newest member of the High Council, and help manage the Royal Order.

Can you put an end to the Sval’s pillaging while keeping the kingdoms at peace? Or will you bring nothing but war upon them? 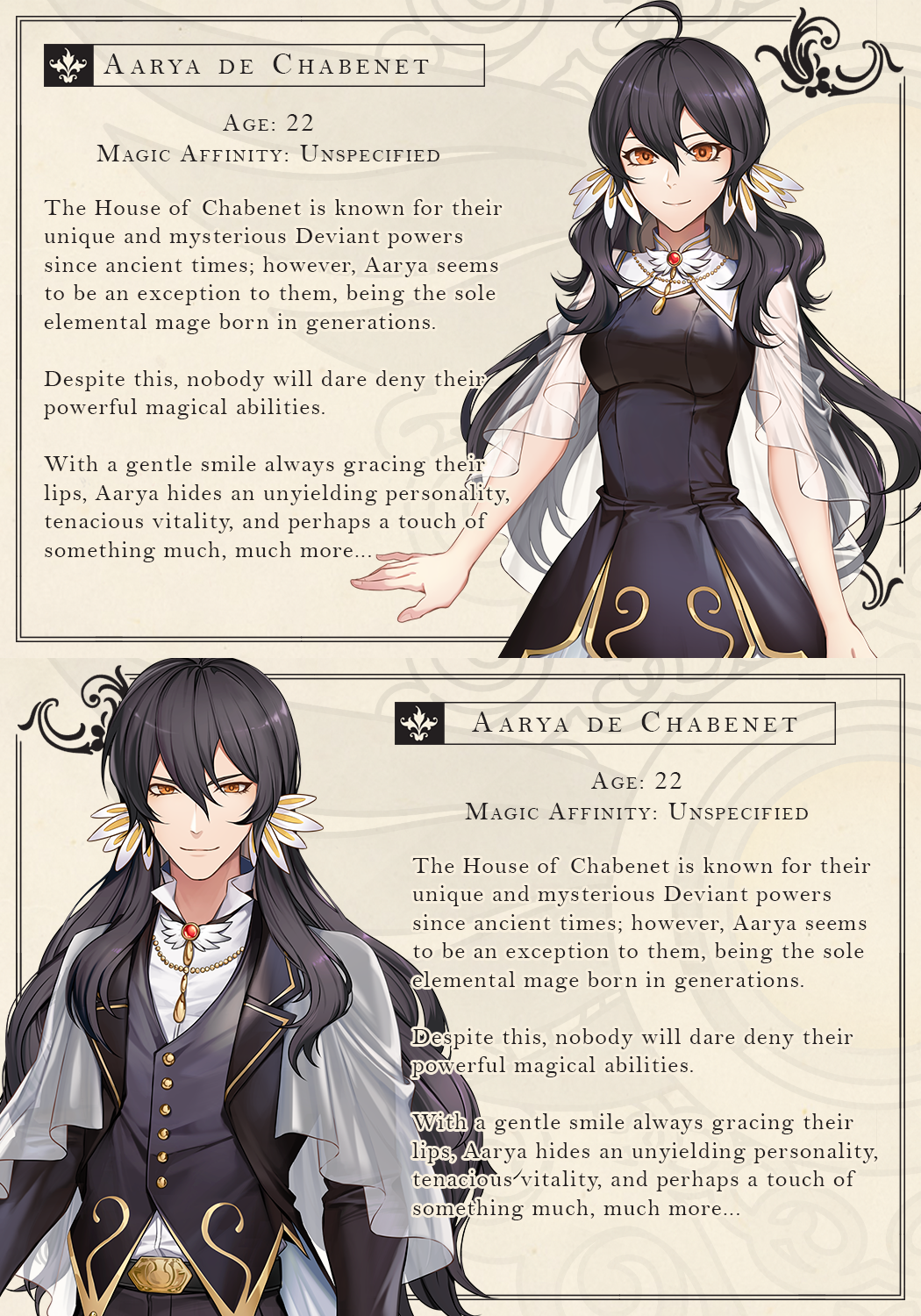 Hello! I want to cosplay as Main Characters (both Female and Male) of Royal Alchemist and Royal Order. I would like to ask you - do you have any references (photos of real-life outfits/accessories etc.)? My biggest problem for now are "hair ties (?)" - I do really know what this hair accessory is (especially Male Main Character of Royal Alchemist). Well, really any references would be nice - they are really AMAZING designs (and it is challenge to find anything similar to it).

Thank you for your time! Good luck in your future endeavors - I had so much fun playing Royal Alchemist that I am waiting for Royal Order!

wow the art is amazing!! I keep coming to the page to see if the game is out! I have question if you could make an assumption of when the VN is going to come out how long would you say until its out?

Thank you so much!

The first demo is going to be released around this September :D So ~1.5 months, give or take. We will make an announcement once we know for sure that it will be ready till then!

goodness gracious, the art has gotten even better :O I'm so excited I absolutely cannot wait for this game !!!!

Thank you so much! :D

ok now woah.. i was just scrolling and checking the page out then boom i see Emrys...damn ....I was just so flabbergasted. he looks so intimidating ...his eyes...whew. i feel like hes the type of person you just want to obey.

You will see lots of him soon once the demo is released! :D Look forward to obeying Emrys~

I really enjoyed the first game, but I can't seem to download this own :(

Thank you! This one is still in development. We're working hard on bringing out the demo soon \o/

Ah! I look forward to seeing the demo then!

I ship F!Aarya and Iris already lmao. I played Royal Alchemist on steam and love the game soooo so much. I'm so glad that the story seem to be taknig place in the same world as the Eskian's princes (and same timeline, hopefully, since it's about the Sval invasion and all.) I'll be waiting for this game to be available on steam!

Thank you so much!!! :D We're working on our Steam page for this one. It will hopefully become available soon \o/

Oh the mcs are cute *scrolls down and sees emrys of Sheorya* .....NICE

Yes, this project will also be available on Steam, just waiting for approval :D

Thank you very much for the support!

Oh whoops, Emrys can step on me if he'd like to.

The Royal Alchemist remains one of my favorite VNs, and I am so excited you all are making another. Good luck and high spirits to the team!!

The well wishes have been received, thank you so much!!! We will do our best to bring out the demo soon :D

so I finally finished making the fanart hope you guys like it took me days to finish it I hope you guys enjoy it I improve my draw a lot ,tried my best to draw the character 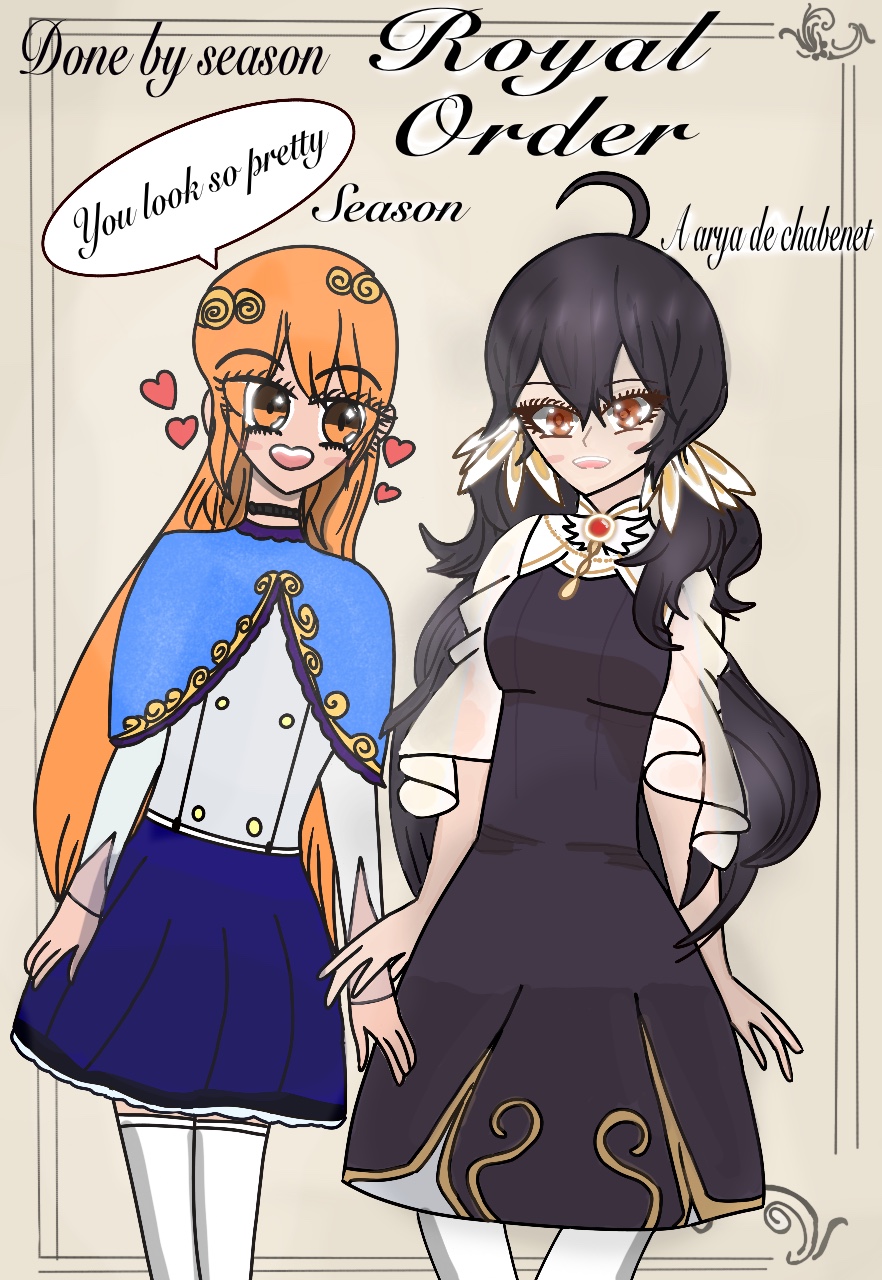 Ahh thank you so much for the cute artwork!!! :D We're so glad you like Aarya's design as well! It's good to see your OC again too.

I can't wait to make the gameplay of this game!  i try to finish my Royal Alchemist playthrough 😅 it going to be fun checking out the new characters! =3  one thing could I make some art of those characters ? 😊 it fun making it last time

Thank you so much! And of course, please feel free to share them with us again! :D

I really liked Royal Alchemist, so I'm sure I'll enjoy this game, but I finished my first playthrough yesterday and I'm still a bit afraid of getting too attached to secondary characters XD

(Please, do get attached to secondary characters, how else can we stab you otherwise :'D //shoved out the door)

Awesome! I loved (read: absolutely adored!) Royal Alchemist and I was hoping you would develop something new. Can't wait for the demo.

Thank you so much!!! Working hard on bringing out the demo! :D

I look forward to playing this game, just logged on today and saw you guys have a new game. looks amazing, this time I will try to not die so much like I did in the last game lol.

Thank you! :D We are working hard on bringing out the demo soon \o/

I was so surprised (but in a REALLY good way) when I got a notification that you guys had a new game because I somehow completely missed or forgot that you were working on this?? :o Just goes to show how crazy everything this past year has been and continues to be I guess? Lmao

Anyways I am really hyped for this!! Give me juicy court intrigue and some beautiful royals I can romance and I am already completely SOLD xD I look forward to actually getting to play this and especially to raise all the wrong stats on my first playthrough(s) and then dying again and again in various ways until I finally get it right xD

Thank you so much! We hope you're doing well despite the craziness.

We are looking forward to releasing the demo soon! And wish you a lot of fun exploring the failures and deaths :P

Ooh, sounding interesting! Do you have any predictions?

We don't have any release date set in stone yet, but if everything goes as planned, the demo release will definitely be this year :D

Looking forward to trying this game too~!!

Been loving the Royal Alchemist too!

Thank you so much! :D

Is the main character date-able? lmao they look soooo good!!!

All jokes aside xD Thank you so much for liking them! :'D

"stat-raising" alright shut up and take all my money

I haven't even played it yet, but I know it's going to be great! TAKE MY MONEY!

Thank you so much for your support! :D

Whoo!! I'm excited for this

I'm so excited for this! I LOVE Royal Alchemist! I'm hoping for a demo so I can try it!

Thank you! Trying our best to bring out the demo soon :D

Oh my gosh, so excited for this! Royal Alchemist is an amazing and beautiful title, can't wait to play this new title!!

I can't wait to try the demo for Royal Order! I loved Royal Alchemist, so I'm sure this will be a great game too. :) The art looks beautiful.

Thank you so much! :D We'll work hard to bring out the demo soon >w<

Super excited for this! :D

Thank you so much!

O_o What a surprise! I'm looking forward to the demo (and playing both games )!!!

OMG THIS IS SO SUDDEN AAAAHHHHHi saw my email notifying me and I was :O for like .... 2 min and again after re reading this entire page 3 times ...AAAAHAHHAHAHAHAHAHH ❤️❤️❤️❤️❤️

Prepare to be assaulted with my money! *Ready my wallet* 😎😏💸💰👀

Thank you so much!!! -get prepared- XD

We will work hard on bringing out the demo and game soon!

...AHEM. Pardon me, My childish, excited side just comes out unexpectedly. I will gonna buy this definitely! ...When I have money. I will put this in my wishlist first ^w^ Thank you, devs~~~

Thank you so much!!! We're super happy you're excited for this :D

Putting our 1000% into working on the game and releasing the demo soon!

oh my GOD. Yesssss! This was such a nice surprise! Do you have plans for a Kickstarter? And will this game also include a Guide, like Royal Alchemist? (It helped me a LOT). I can't wait to know more! Emrys... I'm looking at you!

Emrys staring back at you! :D

Yes, we have plans for a KS campaign. It will be announced at a later date, once we have published the demo :D The full release will come with a guide as well! Hope you will have fun exploring the routes (and deaths)! 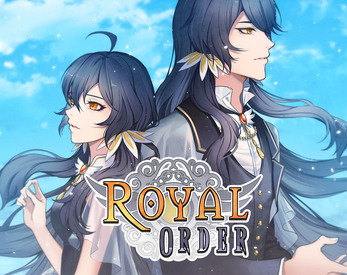